A meeting was held on 16th Dec 2014 to gather ideas about how Widcombe might be improved further once the Rossiter Road scheme has been completed, and to start the process of setting up an ‘Improving Widcombe’ committee to convert these ideas into action.

It was decided to put our efforts into three categories:

How we interact and ensure inclusivity, look after young, old and lesser abled, and ensure that all sectors of the community are involved.

The Widcombe ‘brand’, how we present ourselves, what be want to achieve as a community

How we appear to the World, making Widcombe’s environment as pleasant as possible and attracting visitors across the river to maintain a vibrant society

If you have further ideas on improving Widcombe, please let the Widcombe Association know.

The fact that pedestrian traffic into Widcombe will become even more important as Rossiter Road becomes two-way, combined with the perception by some that the various pedestrian entries into Widcombe are unsafe or unattractive, have put the ‘Entry to Widcombe’ high on the Association’s Improving Widcombe agenda.

In addition it was realised that, following the Council Cabinet’s decision to approve the Rossiter Rd scheme, traffic from the main A36 would no longer have a reason to pass through Widcombe Parade, and this lack of ‘passing trade’ would have to be tackled in two ways: firstly by the regeneration of Widcombe Parade by making it as attractive a destination as possible, and secondly by ensuring that pedestrian traffic from the city centre was encouraged.

To begin the second process, we want to ensure that the entry routes to Widcombe for pedestrians are as attractive as possible. We are liaising with all interested local groups and residents’ associations, B&NES Council, police, and of course our local councillors. The main areas of interest are the Halfpenny Bridge (pictured above), the Riverside pathway and canal towpath, and the underpass at the bottom of Wellsway.

The canal towpath has suffers badly in the poor weather and the poor surface needs attention to diminish the puddles & mud which make walking and cycling less attractive .Volunteers have done some great work, but there is more to be done and more helpers would be welcome. Please contact John Webb of The Canal Trust on Bath 836133 if you would like to volunteer.

The river side walkway south of the leisure centre does appear neglected and can be an unattractive route into Widcombe. We would like to work with other interested parties on improving the general appearance and upkeep, but a major problem can be the street drinkers who tend to congregate here, particularly in the area around Thimble Mill. We recognise that these people are vulnerable and often homeless and usually do not present a threat of any sort, but many people presently avoid this area, and sadly the manager of the Travelodge advises his guests not to use the footpath, and to return to the Hotel at night by taxi.

Helen Peter called a meeting about the problem, involving police, Julian House workers, the Travelodge manager & local councillors. The main problem seems that police and security staff move the drinkers on from the town centre and they congregate in Widcombe, where they can sit, drink & buy alcohol easily. In general they are not aggressive, but they can be intimidating, especially when there is a large number of them. The police have increased their patrols and by law can remove the alcohol since this is a designated no-drinking space. The problem is seasonal & police urge residents to call 101 (non-emergency) or 999 (emergency) to alert them to come before any problems arise. If you have concerns or ideas, please contact us. Her very interesting notes on this meeting can be found here.

Following the meeting, the WA Chairman sent a letter to McColl’s Chief Executive to ask if the company’s policy of selling very cheap alcohol (eg 2 litres of 7% proof cider for £2.89) could be reviewed. The reply was non-committal, apart from a promise that McColls regional manager would be talking to the store manager in Widcombe.

Since then we have learnt that the City of Ipswich is discouraging the sale of cheap strong alcohol – according to the Guardian on 28 Sep 2012:

The Reducing the Strength campaign, backed by Suffolk police, NHS Suffolk, Ipswich borough council and Suffolk county council, is targeted at beers and ciders with an alcohol volume of 6.5% and over, which are often sold cheaply. There are 130 off-licences in Ipswich; 53 will be super-strength free following the launch and more are likely to follow.

The Julian House charity has a website where you can report rough sleepers so that they can be given assistance.

B&NES Council has recently (June 2013) refurbished this most important link with the city centre. The bridge has been repaired and resurfaced and light levels have been improved by cutting back trees at the Station end.

Not only has the bridge been greatly improved, but the very ugly chain-link fencing at the southern end has been replaced, and high-quality paving has been laid to match the rear station forecourt. That these important improvements have been carried out is due to high levels of co-operation between council officers, local councillors, the Widcombe Association and Bath Preservation Trust. Funding was provided by the Trust through the World Heritage Site Enhancement Fund, our local councillors’ fund, the Railway Heritage Trust, and Widcombe Association funds. We will continue our efforts to make this important route as safe and attractive as possible.

For the future we would like to see adequate signage from the station to Widcombe, particularly signs directing passengers to the rear exit from the station, a less forbidding aspect to the tunnels under the railway line, and improved lighting on Halfpenny Bridge. The CGI (in gallery above) by Architect Alex Sykes shows how low-energy LEDs might make the bridge a safer and more attractive environment at night. 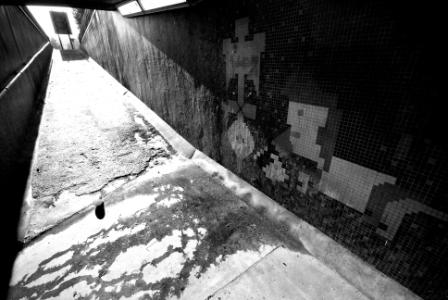 The underpass at the bottom of Wellsway is well-used, but is often very dirty and looks neglected. After heavy rain it sometimes floods .The new safety mirrors that were installed have yellow cages to prevent vandalism. Unfortunately, these tend to prevent pedestrians being able to see if anyone is coming! The graffiti is a constant problem .

We recently held an on site meeting in the underpass with members of Bath Spa Rotary Club, who are keen to take it on as a project. We would like to see it regularly and thoroughly cleaned and are also investigating the possibility of improving the lighting and appearance in the longer term, possibly by installing some new art work and brightening the underpass so it is safer. Ideally it would be covered by CCTV.

If you have any concerns or would like to be involved in helping with any of these projects, please contact us.

Switching to a Green Energy Supplier