The Widcombe Association is pleased to see that Curo have decided not to proceed with the cable car proposals in light of the lack of support from across the City.

Widcombe residents were overwhelming against these proposals because it was simply the wrong scheme in the wrong place.  We believed that it did not address the City’s traffic problems but it would have been intrusive in the world heritage and green belt setting and would have had an unreasonable impact on residents without any real benefit to the City to offset this. In short the proposals were neither beautiful nor inventive. We were also doubtful that the scheme was financially viable without massive tourist uptake, but we will never know.

We are pleased to note that even if Widcombe residents views were totally discounted there were still many more votes against than in favour (47% against 36% for and 17% undecided).  So the wider City shared our view.  This was against the low barrier of an “in principle” question not the more demanding “in practice”. This was despite a PR campaign with tens of thousands of leaflets, presentations and glossy videos directing people to support the cable car. In contrast the WA spent less than four hundred pounds.

This is not “nimbyism” but democracy with residents fighting for what they believe in, seeking real evidence and scrutinising proposals.

Whilst the WA felt this was not the right solution for Widcombe or Bath we all need to renew efforts to find solutions to Bath’s growing traffic problems. CURO have highlighted important issues about traffic and transport in our City and we should work to find beautifully inventive solutions to these problems.

Working with engaged communities would be a great place to start in finding these solutions.

A consultation on the South Bath Transport Options will start on 30 March 2017.

A series of public consultations events will be held from the end of March about South Bath Transport Options. At the events a number of transport options for South Bath, which could help improve connectivity and tackle some of the city’s wider issues such as congestion and air quality will be on show – this includes proposals for a cable car amongst other options. Details can still be found at www.southbathtransportoptions.co.uk  and comments are invited online.

Dates for the consultation events and are as follows:

Notice from the Widcombe Association: 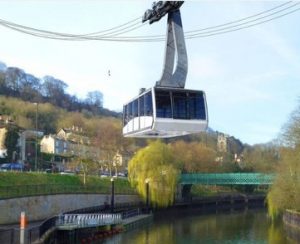 Curo have agreed to re-run their exhibition immediately preceding our AGM (6:30 to 7:30 0n Thursday 27 April 2017 at Widcombe Junior School). This will be shortly before the consultation period closes. It will not provide any additional information or offer a debate.  However, it will give residents a final opportunity to see the proposals and comment.

It is clear that any cable car development would have a significant impact on Widcombe, its heritage setting, open countryside and for those homes which could be under or near any cable car route. We will inform all Widcombe residents on the consultation and we would urge residents of Widcombe to find out about the proposals and contribute to the consultation. See www.widcombeassociation.org.uk for further updates.

We are lobbying, at this stage, for further information from the promoter of the scheme so that a consultation can be meaningful. We are sharing the questions we know that concerned residents within and outside Widcombe are asking about this scheme.

There is a group of residents who are very concerned about any cable car that could pass over or near their properties and they have formed an action group. You might well have seen their leaflet. This is not formally part of the WA although it includes many members of the WA. They have set up a website at www.nocablecar4bath.org for further information. Click here to see the opposition leaflet.

The WA encourages all our members and residents to go to the consultation events and take part. Please also encourage people outside Widcombe to take part. However, it is fair to say that we are very sceptical about this consultation and the level of information that we are told will be available at this stage. We feel that asking whether an idea is good in principle is flawed unless there is a reasonable understanding of what it would actually mean in practice.

We also wrote to all Bath Councillors to suggest some questions they should ask at their briefing from Curo. This list was passed to Curo at the end of March by one of the Councillors. We have had no response from Curo yet. Click here to see the letter.

Click here to see a statement issued by the WA Chair.

LETTER: Curo cable car is in fact aerial tramway that would harm the green belt