This page has been compiled by members of the Widcombe & Lyncombe Local History Society with help from the archivists at Bath Record Office and Library, and from books about the area and other sources.

Where the City meets the Countryside

Widcombe is an area of Bath situated on the south side of the River Avon less than a mile from the city centre and a few minutes walk across the footbridge from Bath Spa railway station.

Apart from its modern day attractions of shopping and restaurants, Widcombe has spectacular views, and streams and springs which in the past provided power for two mills and cold water spa facilities in Lyncombe Vale.

There is much to captivate historians of all kinds: interesting bridges (including Ralph Allen’s Palladian Bridge – pictured below), churches, and quiet, now unused, burial grounds including the landscaped Abbey Cemetery of 1844. Other burial grounds include Perrymead Cemetery, the Baptist Burial Ground, the Quaker Cemetery and although not falling within Widcombe proper but containing the remains of many of its inhabitants, the Smallcombe Cemeteries. There are also many interesting war memorials in Widcombe which are worthy of attention. 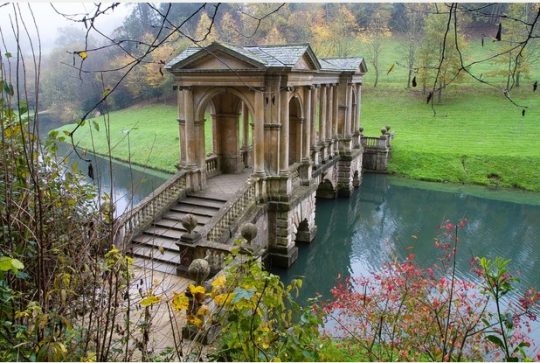 The modern Widcombe ward is bigger than its historic namesake but in spite of disaster (Ha’penny Bridge, which connects Bath Spa station with Widcombe, collapsed in 1877) and flood (the last being in 1968), bomb damage in 1942 and major redevelopments in the 1970s, most of the area is much the same as shown on postcards of 100 years ago, and one of the Widcombe Association’s main concerns is to preserve this heritage.

The story of Widcombe has several phases. After slow early growth, there was expansion in the 18th and 19th centuries and then some major changes in the 20th century.

The background of Claverton Down, Combe Down and Beechen Cliff was created in prehistoric times when deposits of oolitic limestone were lifted up by continental shifts. These deposits, known as Bath stone, were used by the Romans in the first four centuries AD and by generations ever since.

Ancient British settlement is indicated by the names of the two parishes of Widcombe and Lyncombe which derive from the old Celtic words for ‘valley’ and ‘water’. Widcombe is the Wide Valley (or perhaps Withy Valley) and Lyncombe is the Vale of the Lynbrook – or Watery Bottom as it is known locally.

There is some evidence of Roman activity, but little remains of old Lyncombe. A few Anglo-Saxon names are recorded from the 11th century and there is said to have been a Saxon chapel in Church St before 1066. This was rebuilt and dedicated to St Thomas à Becket at the end of the 12th Century. It was rebuilt again in the late 1490s and is one of Bath’s oldest churches (pictured below). St Mary Magdalen in Holloway, with its famous Judas tree, is another.

The site of a medieval manor has been identified in Lyncombe Vale, but probably the oldest inhabited part of Widcombe is Church St, where 11/12 has remains from 1560 and Widcombe Manor (formerly Widcombe House) is partly 18th century with earlier origins.Horace Vachell, a one time owner, celebrated it in 1937 as ‘The Golden House’ in one of his many novels.

The street continues as Church Lane, the old mule track going south and to what was the Prior of Bath Abbey’s deer park. In the 1720s when Bath was becoming fashionable, the park and the nearby stone quarries were being acquired by the local postmaster and benefactor, Ralph Allen. Prior Park, his Georgian mansion was designed by John Wood the Elder ‘to see all Bath…and for all Bath to see…’

Since 1829 the mansion has been a Roman Catholic school. In its Grade 1 listed landscape garden, owned by the National Trust and open to the public, there is a Palladian bridge from 1755 – one of only four of this design in the world.

As Bath increased in size during the 18th and 19th centuries, so did Widcombe. Late Georgian villas and terraces were built to accommodate the families of the middle classes and retired officers who flocked to the area with their domestic servants.

Between 1801 and 1841 Widcombe’s population trebled from just under 3,000 to just over 9,000. Lyncombe Hill, Caroline Buildings, Widcombe Hill, Crescent and Terrace, Prior Park Buildings and many others all date from the early 1800s.

It was a different story along Holloway, the old road to Glastonbury, and in the Dolemeads which were prone to flooding. Poor quality housing sprang up for the low-paid and unemployed. Breweries, pubs, off-licences and ale-houses were everywhere and the crowded courts and alleys of Holloway were notorious for drunkenness  and crime. For the destitute there was the Parish Poor House and the Paupers’ Burial Ground. In the first half of the 20th century great changes were made in the Dolemeads and again in the 1970s when Holloway was redeveloped.

The 19th century also brought commerce, industry, travel and employment to Widcombe. This meant the Kennet and Avon Canal in 1810, Brunel’s Great Western Railway in 1841 and the Somerset & Dorset Joint Railway in 1874 (running through Lyncombe Vale and axed in 1966).

The Religious  Revival brought the subsequent Baptist Church with its landmark roof in 1820; St Mark’s in 1832; St Matthew’s in 1847 and in the same year, the Temperance Hall. The Abbey Cemetery (pictured below) was opened in 1844. During this Victorian era, schools were founded (railway arch No 14 housed the first infant school in1855) and church halls were built. When Widcombe was incorporated into the city in 1836 it got its own police station in another railway arch.

One of Bath’s oddities was the 4-acre ‘Little Zoo’ at the top of Lyncombe Hill. Established in 1907, it had disappeared by 1911.

Interested in finding more out about the Local History Society?

Widcombe has seen many famous and noteworthy residents. Widcombe Manor was home not only to author Horace Vachell, but to inventor and entrepreneur Jeremy Fry, an intimate of Princess Margaret and her set who were regular visitors in the 1960s. The Stothert and Pitt families – ‘crane-makers to the world’ – lived in Widcombe, as did Sir James Brook, the White Rajah of Sarawak, and George Carwardine, the inventor of the anglepoise lamp. A plaque outside Widcombe Lodge in Church St attests to the residency of author Henry Fielding who wrote some or all of the novel ‘Tom Jones’ there – in which his character Squire Allworthy bears striking resemblance to Ralph Allen, his neighbour in Prior Park mansion.  The famous castrato Venanzio Rauzzini lived in Bath from 1777 until his death in 1810 and had a town house in the city and a Summer residence at Perrymead Villa, Widcombe.   Stefan Zweig, writer and internationalist, lived for a time in Rosemount Lane and Arnold Ridley, author of ‘The Ghost Train’ and an actor best known as Private Godfrey in more than 80 episodes of ‘Dad’s Army’, lived in Widcombe.