In Nov 2010 Sarah Buckland, whose horses can be seen on Lyncombe Hill, passed on to the WA an article which appeared in the publication ‘The Sphere’ in 1907. This started a flurry of research activity from Sarah Lewis and the WA’s archivist and historian, Phil Bendall, the result of whose initial researches appears below. 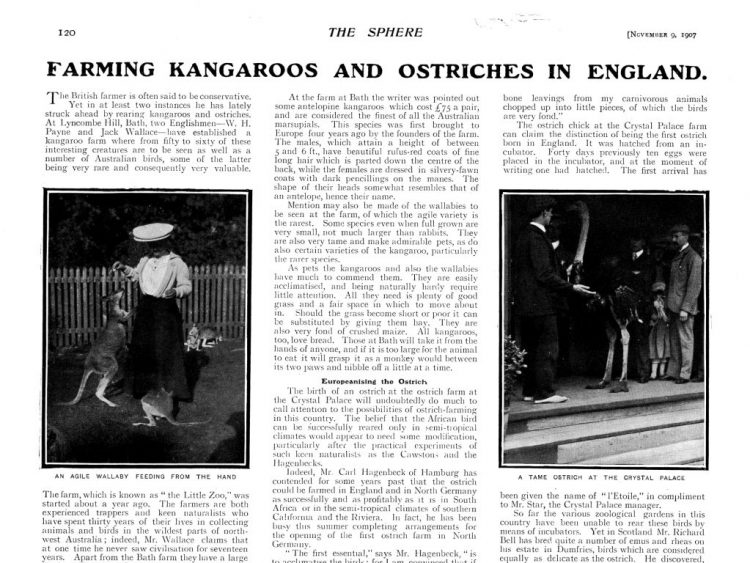 In the period 1907 – 1910 Lyncombe had a zoo. Known as “The Little Zoo”, it was started by Walter Henry Payne and Jack Wallace and had kangaroos, wallabies and birds collected by them in expeditions in the extreme north of Western Australia.

Walter Henry Payne was born in 1849 at Bath, son of William and Sarah Payne. His father was a printer, who originally had his business at Elm Place, on Bear Flat, before forming in the late 1850s the firm Hayward and Payne which by 1868 had become Hayward, Payne & Meyler. At some point Walter Payne went to Australia and there are records of two leases being granted for mineral leases in Queensland. According to the press report in The Spherein 1907 [1], Walter Payne and Jack Wallace had spent thirty years hunting for animals which they sold to dealers. “Mr Payne and his partner Mr Wallace get as much as £30 for an adult specimen, and from £5 to £10 for a “joey,” … Both men have spent many years in the wildest parts of the island continent, and stand well with the savage aborigines, whose services are so important in taking the animals. Headquarters are established at Wyndham, in the north of Western Australia. When setting out on one of the periodical hunts a big outfit of draft and saddle horses is necessary, as well as great rolls of wire for the requisite traps.” [2] The hunting was carried out in conjunction with the aborigines who provided information on the whereabouts of the animals and either traps or dogs were used to capture the kangaroos and wallabies. They also collected birds such as emus, parrots and finches and lizards. The animals were shipped to dealers in Europe from Fremantle, Western Australia [3]. In 1906 they arrived in England with forty-five kangaroos, twenty wallabies and over 6000 finches, parrots and lorikeets [1, 4].

The headquarters of the operation in England was set up on Lyncombe Hill. “The farm at Bath is situated on the top of a hill and covers about four acres of ground. It is surrounded entirely by a high stone wall, a necessary precaution when it is remembered that the great kangaroo, known in Australia as the “boomer” or “old man kangaroo,” can easily spring 10 ft. into the air and make leaps of 30 ft. There are a number of spacious paddocks each containing its shelter, into which the animals can retired when the weather is bad, as well as a nursery, a large bright compartment heated very near to tropical temperature, where several young and valuable specimens are kept.” [1] From the description of the extent of the zoo and Bath Directory entries in the period 1906-1910, the “Little Zoo” was near the house called Rosemount, at the top of Rosemount Lane, This would seem to be the field of 3.8 acres which appears on the 1912 Ordnance Survey map between Greenway Lane and Lyncombe Vale Road. The field has subsequently been built upon.

The enterprise seems to have lasted only until 1910 as no entry for ‘Payne & Wallace’ appears in the 1911 directory. Instead there is an entry for ‘W H Payne’ as landlord of The Walcot Wine Vaults in Walcot Street and thereafter he seems to have left Bath returning around 1924, living in Walcot where he died in 1929.