Simon Wynne, with partner Tracey and young daughter Alexandra, returned in the summer of 2018, as landlord of the Royal Oak in Pultney Road.  Simon has lived in Widcombe all of his life.  He went to the Junior School and has been a publican in Widcombe for over 25 years.

A traditional pub, with good home cooked food at reasonable prices including traditional Sunday Roasts. A hospitable place for the many visitors staying in local guesthouses or from boats on the nearby canal.   Building back his regulars from Widcombe and of course pre and post match for rugby fans going to the nearby Rec.  Televised sports, a pool table and a skittle alley that doubles as function room, all add to the traditional formulae.

History:  Summerlays Buildings were built in 1819. Three cottages were converted into the Royal Oak later in the 19thCentury. Its most famous proprietor was Bill Rossiter.   He was landlord for over 50 years.  An Alderman of the City and President of the Widcombe Social Club in 1970 when it moved to the bottom of Widcombe Hill.  The Royal Oak was known as Rossiters Free House.  In 1974 when the new by-pass was created it was named after him.  After the war one enterprising landlord, Eris Jackson, hosted the Bath Mouse Racing Club. It held weekly mouse races.  For a taste of 1940’s Widcombe view a British Pathe newsreel featuring the mouse races at http://youtu.be/QSHqoXMbKjQ 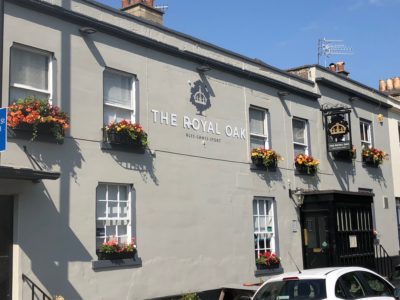