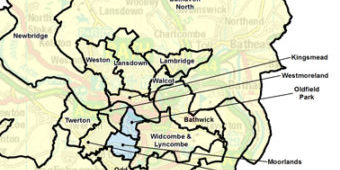 The new electoral ward is to be Widcombe and Lyncombe with two elected Councillors.

Following repeated representations to the Commission, we have largely achieved our aim of retaining the areas, residents and businesses associated with what most people think of as Widcombe in one electoral ward.  We will continue to have two Councillors representing our area.  We strongly believed that community identity should be a strong factor in the design of the new electoral wards not just equality of the number of voters for each councillor.

Under the Commission’s initial proposals the historical Widcombe parish would have been split between five wards and ten councillors! Some covering different areas or even lengths of the same streets.  We were not alone with equally strong representations from across the City particularly in Combe Down and Larkhall. Together this resulted in the unusual step of a comprehensive re-deisign of the original proposals. Whilst not everyone will be happy with every element of the proposals the final scheme has addressed many of the issues raised and in our view is a substantially better outcome.

Full details of the final recommendations on the link.  The new wards are to come into effect for the 2019 Council elections next May..